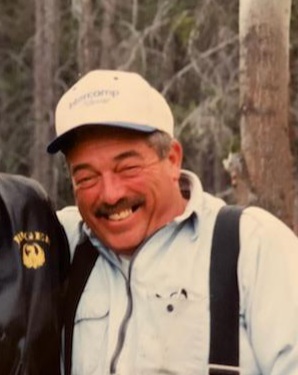 Leon “Lee” Tracy our beloved father, grandfather and friend passed away peacefully on February 25th at the Granite County Medical center in Philipsburg just days after his 81st birthday. Lee was born on February 23rd, 1940 to Bertram and Ellen Tracy of Bremerton Washington. Lee was the youngest of 2 brothers growing up in Bremerton.  At a very young age Lee was married to his first wife Betty Owsley. Lee and Betty had 2 children together Rick and Kathie. Lee later married his 2nd wife Betty Hartnett and had 2 children together Pam and Lee (L.A). Later in life Lee married his wife Sharon and gained a stepdaughter Christina.

Lee’s livelihood was earned through his life as a diesel mechanic. Lee’s trade brought him to Montana in the 60’s where he proceeded to reside until they day he left this earth. Lee was a Montanan at heart and loved the mountains.  In Granite County his nickname was “Tracky” and he was well known by many of the local “old timer’s” from the area. He was a mechanic for the Black Pine Mine and also worked on machinery for the local miners, loggers, and ranchers for many years. Lee was an avid sportsman who in his spare time enjoyed hunting as well as travelling back to Brinnon, Washington to catch up with old friends and enjoy time on the Hood Canal fishing for all types of seafood.

In the hunting world Lee was well known for the trophy elk he named “Bruce” that he had harvested in November of 1971.  Bruce hung in the White Front Bar in Philipsburg for many years until he was moved into the Rocky Mountain Elk Foundation to be on display for all to admire until he was later sold to Cabela’s in Missoula.

Lee will be remembered as an incredible friend who valued integrity and believed a “handshake” and a man’s word were of high value. He spent his life as a very stubborn, tough and proud man, though those that knew him well know that he was a softy at heart. Lee hated crowds and big gatherings even though the many people his life touched could fill a stadium. He was more than willing to give a helping hand to those in need and did so for so many.

Lee is preceded in death by his wife Sharon, his parents Bertram and Ellen Tracy, his brother Rodney and his daughter Kathie. He is survived by his children Rick Tracy, Pam Muchmore, Lee Tracy and stepdaughter Christina Davis. He also leaves behind grandchildren Lianne Fluharty, Melissa Metesh, Ryan Spinelli, Sarah Spinelli, Brandon Tracy, Ryan Muchmore, Chayce Hanson, April Davis, and Dustin Davis as well as several great grandchildren.  Lee had many amazing long-term friends from Philipsburg all the way to Brinnon, Washington that he leaves behind as well.  He will be sorely missed by so many.

Lee’s wishes were to be cremated and his ashes to be buried alongside his beloved daughter Kathie at his property up Willow Creek. At this time the family is holding off on a service due to the ongoing pandemic and a multitude of family and friends living out of state. We will be planning an informal celebration of life to be held sometime later this summer.

Plant a tree in memory of Leon "Lee" Tracy

Lee and Sharon , You hold pieces of my heart forever . Thank you for being such amazing Brinnon neighbors and wonderful friends !! I am blessed to have known you both !! Much love, Jane

You were my favorite old grumpy ass😉 Sure going to miss you! Say hi to Sharon for me!!💙💙💙

A Memorial Tree was planted for Leon "Lee" Tracy

Plant a tree in memory of Leon "Lee" Tracy