Plant a tree in memory of Lawrance
An environmentally-friendly option 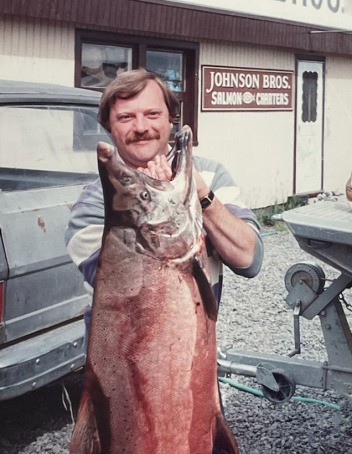 Surrounded by his loving family and wife, on a bright sunny day, our Dear Lord took the light of our lives home and ended his suffering.  On March 11, Larry LaSalle, an amazing son, husband, father, brother, brother-in-law, uncle, grandfather, cousin and friend left us to join his parents, Loretta and Leo; nephew, Bridger; great friend and partner, Leonard Readicker;  and many other beloved family members and friends to be in the arms of our Dear Lord.  Once upon a time, he reached out his hand and we all began a journey.  Along the way, we discovered that being with him grew sweeter and sweeter every day.  He was so very kind to all that met and knew him – often referred to as a heck of a nice guy.  His gentle spirit touched so many people and animals alike.  He was never quick to anger and spoke nothing damaging about anyone.

Larry grew up and attended schools in Anaconda.  He spent his childhood hunting, fishing and camping with his family.  Larry enjoyed his many trips to Alaska with his brother Leo, son Aaron, partner and dear friend Leonard, Leonard’s wife Char, and Cindy.  He often spoke of his time on the Anaconda Swim Team.  He would often boast that he could always outswim his son Aaron.  He graduated from Anaconda High School in 1977 and his classmates were always treasured in his thoughts and stories.  He furthered his education at Montana Tech.  He operated several businesses in Butte and he was dearly loved and respected by all his employees.

We are truly so fortunate to have had him in our lives and to have learned so much from his goodness.  He is survived by his wife, Lucinda/Cindy, children, Aaron (Myranda), Lindsey (Paul), and Ken, brothers, Leo (Kay) and Louis, sister, Laura, grandchildren, Reece and Emmylia, and many nieces and nephews.  He was also especially close with his nieces Katie and Stacy and his grandniece Retta. The light of his loving smile had given so many comfort and warmth.  It’s not goodbye – it’s until we meet again.  We all love you so very much!  My Husband, I love you as much today as yesterday and will love you forever .

Per his wishes, no funeral will be held.  Please send thoughtful gifts to the Anaconda Hospice,118 E. 7th St., Anaconda, MT 59711, local food banks, and animal shelters.  Larry loved family visits to Yellowstone and Glacier National Parks.  His family asks that you think of him on your next visit to the parks.

Plant a tree in memory of Lawrance by clicking here.
To send flowers to Lawrance's family, please visit our floral store.

Plant a tree in memory of Lawrance
An environmentally-friendly option

Plant a tree in memory of Lawrance

2 trees planted in memory of Lawrance

Our thoughts and prayers are with you
Pauline, Bryan and Chris

A Memorial Tree was ordered in memory of Lawrance LaSalle by Pauline, Bryan and Chris.  Plant a Tree

I am so sorry to hear this, I always thought the world of Larry , he also was agreat boss.

So sorry to hear this.  Larry was a great boss.  Amazing man.  Very sad to hear.  My condolences to cindy and family

A Memorial Tree was planted for Lawrance LaSalle

Plant a tree in memory of Lawrance